From the looks of that list, we are getting another new minifigure in Carnage. From the Ultimate Spider-Man TV series, Carnage is actually Peter Parker who was injected with an enhanced Venom symbiote sample by Green Goblin. I was hoping for a Cletus Kasady version but as long as we get a Carnage minifigure, I’m happy. 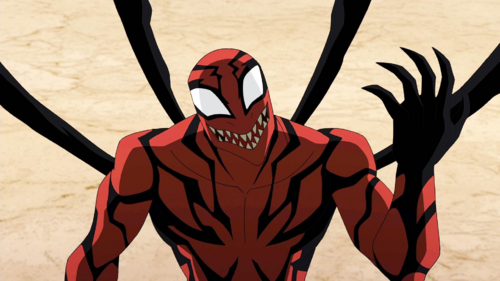 For the Rhino and Sandman Supervillain Team set, we already reported on that one but the set name confirms the rumors from a few days ago.

There’s no mention of which set that Iron Spider will be in at this time.

As for the Ant-Man set, it was mentioned in a response to NovaSentinel’s post that it will be an Avengers Assemble set and not based on the movie. Others think that this set will still be a movie set based on the set name that was given. We’ll see in a few months if it will be the animated set or the movie set.

Over on the LEGO DC Comics Super Heroes sets, amazingbricks has given set names of the sets that we reported on from Just2Good’s video.

From the looks of it, Killer Croc may possibly be showing up in The Batboat Harbor Pursuit set since it is a water based set.

As for the Jokerland set, there’s no details on who will be included except for Batman and the Joker. Maybe another Harley Quinn minifigure? We shall see.

There’s no details yet on the rumored Deathstroke and Teen Titans Starfire and Beast Boy set(s).