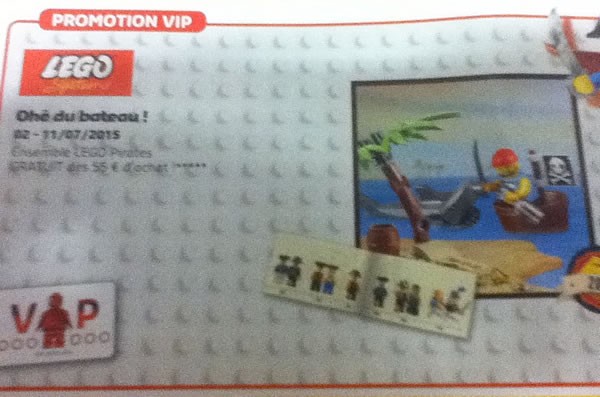 Hoth Bricks has given a first look at this year’s VIP Retro Minifigure Set. Last year, we had the LEGO Classic Spaceman Minifigure (5002812) which included a white Spaceman. For this year, the set will be a Pirates set which includes a Pirate minifigure on a boat mast with a skull flag, a shark, a palm tree, and a barrel. I assume the packaging of the box will be similar to last year with the slide out box and includes a small booklet taking a look back at the Pirates theme.

As for the requirements to get the Pirate VIP Retro Minifigure set, it’s stated on the image of 55€ but for us here in the States, it’ll probably be a gift with purchase of $99 or more at LEGO Stores and on [email protected] for LEGO VIP members. It was rumored that this set would be happening in July but it doesn’t show up on the July 2015 LEGO Store Calendar so I think it’ll be happening here in a few months. Last year, this promo was in September so I think it’ll be around the same time. What do you guys think of this Pirate Retro Set?

LEGO Pirates Chess Set (40158) Out of Stock Until September