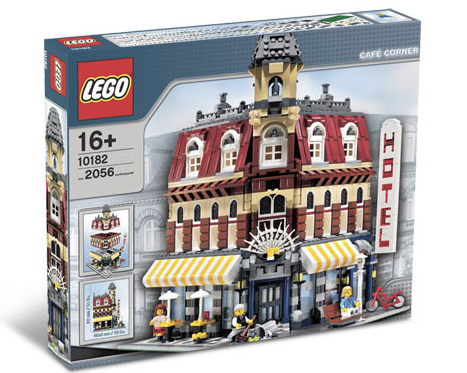 becoming the latest set released this year, LEGO has announced that they are bringing back some of the more popular Modular sets including Cafe Corner (10182) and the Green Grocer (10185) with a new theme/subtheme called Revival. This weekend at LEGO Stores and [email protected], they’ll be selling the sets for a limited time for VIP members. The only catch is there’s no word on what the pricing for the two sets will be. Hopefully, they’ll be the same as before but considering inflation since they sets were first released, I bet they’ll be slightly higher than before.

It was also stated that LEGO is planning to release more Modular sets in the future. There’s no mentioning of which sets will be coming but for now, at least we don’t have to resort to BrickLinking parts to recreate them. Check out the full press release below as well as an image of the sets.

BILLUND, DENMARK (April 1, 2015) – For many LEGO fans, the 10185 Café Corner and 10182 Green Grocer were some of our most popular sets in the LEGO Modular Building series. For the newer LEGO fans who may have missed out on them, we’re now bringing these sets back, for a limited time, the same way that they were released in 2007 and 2008, respectively. This reintroduction of the sets will also bring a brand new theme called Revival.

To celebrate the return of 10185 Café Corner and 10182 Green Grocer, we are having a special LEGO VIP shopping event that will be one that you won’t forget! This weekend, April 3-5, we are making these two sets available in limited quantities on LEGO Brand Stores and on LEGO [email protected] We also have another surprise waiting for you during the checkout process but you’ll have to see what that is for yourself.

We’re aiming to roll out more retired LEGO Modular Buildings in the near future. If you tune into our social media pages in the coming months, expect to see sneak peeks, and hear our LEGO designers reintroduce these sets again in a brand new format.

Modular Revival is just getting started, so you can expect a few things to change over the coming months as we plan to roll out these exclusive sets and who knows, maybe you’ll see other themes be implemented into the Revival series.

We have a lot more to show you.