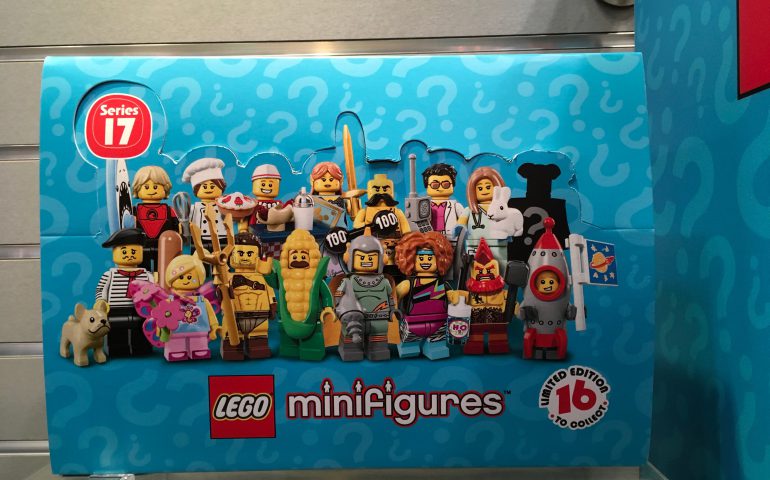 The Series 17 LEGO Collectible Minifigures (71018) were revealed yesterday at the 2017 New York Toy Fair. Although there are no names for the characters announced yet, the folks over at Eurobricks has put out what seems to be the official names of the characters.

As with previous Collectible Minifigure series, I’ve already gotten a few requests for the feel guides I put out for this series and there’s no better time than now to do one. I’ll be using the references from the box image to discuss how to feel for a particular character. Again, some may not need a guide but for those who are interested in one, hopefully this helps.

Surfer Boy: The surfboard is the easiest thing to feel for.

Gourmet Chef: There are quite a few things that make her easy to find including the chef’s hat, pie, and whisk.

Hot Dog Vendor: The curved hot dog and bun pieces are the things that stand out for him.

Elf Maiden: You should feel for the sword piece as it is the easiest thing on the Elf Maiden to find.

Circus Strongman: The new round barbell piece is the only thing you should feel for when finding him.

Yuppie: The easiest thing to feel for is the mobile phone as it has a pretty distinct design.

Veterinarian: I think the rabbit piece is the only thing you feel for.

Highwayman: Although he’s only a silhouette and a mystery, there are many reports that this minifigure is a Highwayman which should have a large hat. I’ll update when there are more details.

Connoisseur: There are a few things that make him stand out such as the bulldog, baguette, as we as the little hat.

Roman Gladiator: The only thing that really stands out for him is the large trident piece.

Corn Cob Guy: He should be easy to feel for with the large corn mold piece.

Retro Space Hero: He has a few cool parts to feel for such as the new ray gun and helmet.

Dance Instructor: Her large curly hair piece stands out for me. There’s also a 1×1 round brick that you can use as well.

Battle Dwarf: The hammer should be more than enough to find him. You can also use his mohawk as well.

Rocket Boy: He shouldn’t be hard to find with his large rocket costume mold.