During the whole month of October, when you purchase over $99 or more at LEGO Stores and on [email protected]

, you are eligible for the first of two FREE exclusive holiday sets for 2014, the LEGO Creator Toy Workshop (40106). The contents of the box include three un-numbered bags, one white 6×8 plate, one nougat 6×8 plate, and a small instructions booklet. 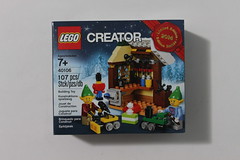 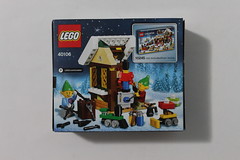 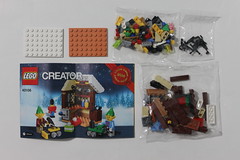 For the minifigures, you have a male and a female elf. For the male elf, the torso is a dark red flannel shirt and it has in a couple of LEGO City sets before. The dark tans legs that are used are from Bilbo Baggins and many others. He has a smiling expression and the elf ears and green hat piece is the same ones that we’ve seen on other elves. 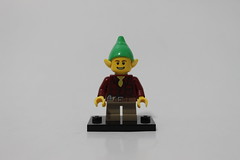 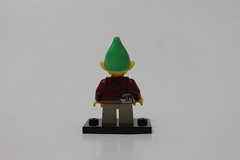 The female elf is also a combination of parts that we’ve seen before. The blue sweater with purple scarf torso has been used in a couple of older Winter Village sets as well as the 2012 Holiday Set. The legs are short light bluish grey. She has a double-sided face with a smile on one side and a scard look on the other. Again, the elf ears are the same as the male elf. She also has a paintbrush as an accessory. 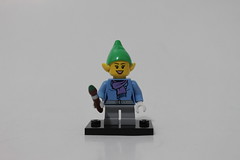 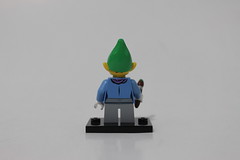 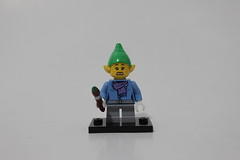 For the set itself, you have a small toy workshop as well as some already assembled toys including a yellow bulldozer, a green steam engine train, a soldier nutcracker, and a couple of presents. 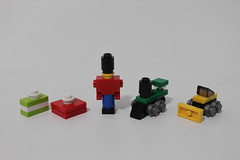 The toy workshop is a corner area and is filled with various tools to help the elves build the toys. There are 9 different tools which are separately bagged including a 4-way lug wrench, a monkey wrench, a box wrench, an open end wrench, a screwdriver, a drill, a cross pein hammer, and an oil can. 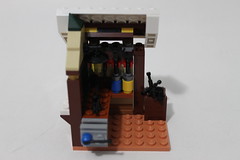 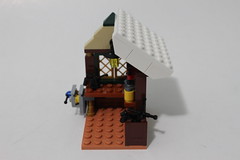 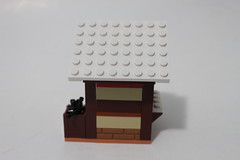 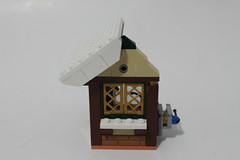 One end of the workbench has a vise while the other side has what appears to be cans of paint. There is also a box to hold some of the leftover tools. The outside wall is pretty plain but the window give a little bit of detail. The white roof is on a hinge that opens up to give you easier access to the tools hanging on the wall. 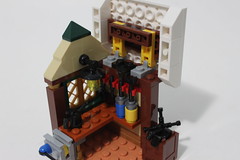 . There’s no actual space to put the Toy Workshop inside Santa’s Workshop but it just looks good next to it especially since the colors pretty much matched up.

Overall, the LEGO Creator Toy Workshop (40106) is a pretty neat set. Although it was meant to go with Santa’s Workshop, it looks good as a standalone set. Again, it is available for FREE with purchases of $99 or more at LEGO Stores and on [email protected]

The second 2014 Holiday Exclusive set is the Ice Skating (40107) set which will be available during “Brick Friday” weekend from November 28 – December 1st also with purchases of $99 or more. 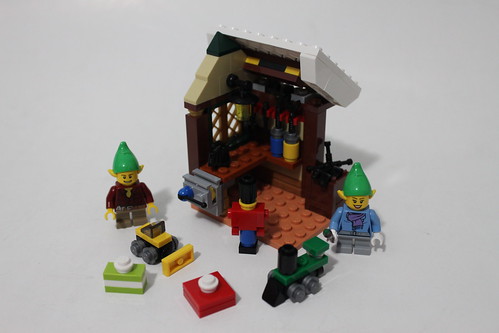