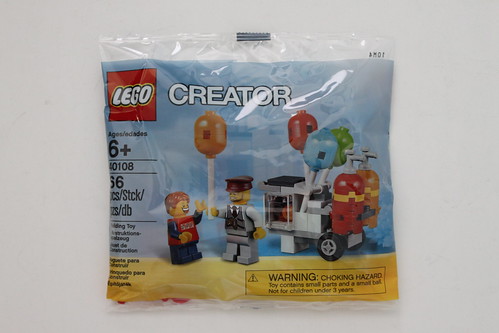 During the better part of June, LEGO Stores and [email protected]

will be giving out the LEGO Creator Balloon Cart (40108) polybag as part of the June 2014 gift with purchase promotion. The set consists of 66 pieces and it is free with purchases of $75 or more. 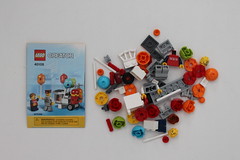 There are two minifigures in this little polybag, the balloon vendor and a young boy. The vendor wears your old-style uniforms that you would have seen back in the day. He wears a red tie and a grey striped vest with a pocketwatch in one of the pockets. He only has a single-sided head with a happy expression and wears a red hat. 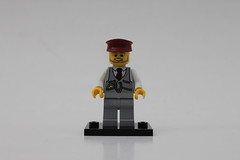 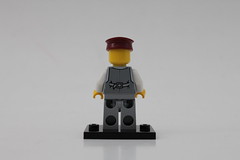 The boy has a red shirt on with dark blue sleeves The shirt has some sort of design on it. Not sure what it is but it’s interesting. He also has dark blue short legs. One nice thing that he has is the double-sided head. On one side, he is extremely happy to get a balloon. On the other opposite side, he is sad and is even shedding a tear, probably due to the fact that his balloon flew away or wasn’t given one. 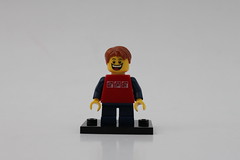 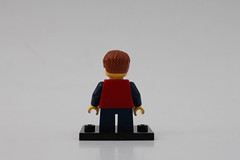 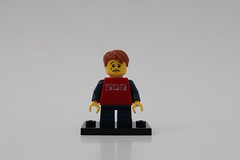 The first thing that you see after you finish building the balloon cart is that it is very colorful. There are four balloons in the set: orange, red, lime green, and medium azure. On one end of the cart, you got your red and orange helium tanks that are as large as the kid. In the middle, you have a place to put three balloons although I managed to squeeze all four provided in. On the other end of the cart, you have a small container to put a couple of studs to represent uninflated balloons. Above that what I believe is the handle for the cart although it is a bit high for the vendor to push it. 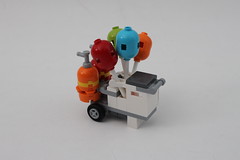 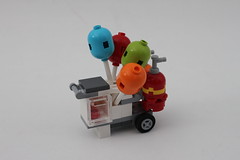 Overall, the Balloon Cart (40108) is a very nice promotional polybag for this month and it goes great with the LEGO Creator Fairground Mixer (10244)

. The only knock I have about it is that it is somewhat unproportional compared to the minifigures. Other than that, it’s another good gift with purchase and one of the larger polybags given out for free by LEGO, piecewise. You have until June 22nd to put your $75 order in on [email protected]

to get yours too. 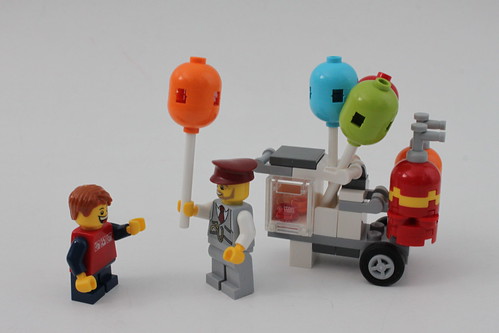