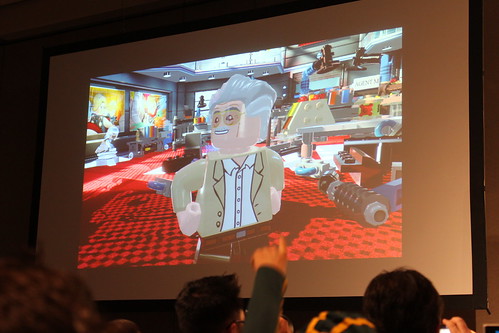 Arthur Parsons of TT Games did an interview with GameSpot after the Marvel Video Games panel yesterday and showed off a 20 minute gameplay video of the LEGO Marvel Super Heroes video game. If you were following our live report on the game yesterday on Twitter, you would’ve seen that it was announced that Stan Lee would also be a playable character. In the extended gameplay video, you can some some of Stan’s superpowers. Since he is the almighty Stan Lee, he can pretty much have any superhero powers such as Spider-Man’s web slinging. Another of his moves is a flame torch coming from his eyes kind of like a Cyclops/Human Torch combination. It was also mentioned that he has a Mr. Fantastic move as well but it wasn’t shown. In an IGN video, Stan is shown to have an adamantium skeleton. Finally, Stan gets to “Hulk” up and turn into Stan Hulk. The body is exactly the same as the original Hulk character but he has Stan’s white hair instead. The animation of him changing back and forth is awesome. The LEGO Marvel Video Game is now available for pre-order at Walmart

which includes the Iron Patriot bonus minifigure in the Gun Mounting System (30168). The game will be shipping on October 22 from them. Below is just a partial list of over 100 playable characters that are in LEGO Marvel Super Heroes: