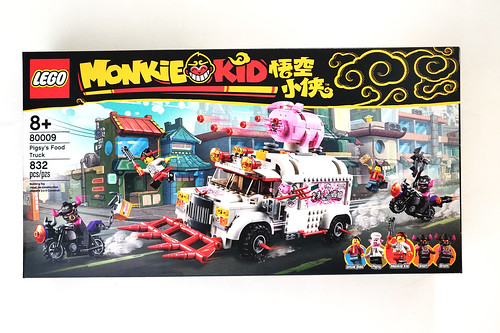 Continuing with my reviews of the LEGO Monkie Kid sets, we’ve come to probably my favorite set from the wave which is Pigsy’s Food Truck (80009). It has 832 pieces and retails for a decent $69.99. The contents of the box include eight numbered bags and the instructions which has the large sticker sheet packaged along with it. 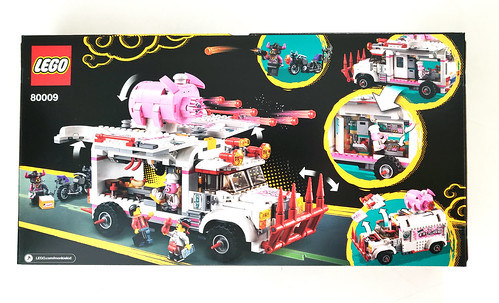 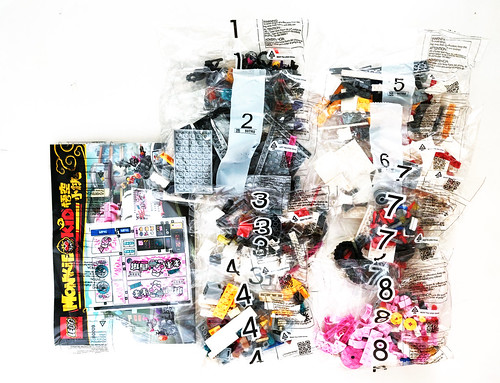 There are five minifigures included with this set, Monkie Kid, Pigsy, Uncle Qiao, Snort, and Grunt. This version of Monkie Kid has him in his work outfit from Pigsy’s. The front of the torso shows an unkempt shirt with stains on it. The back has Pigsy’s logo. His double-sided head shows him with a scared look on one side and an look on the other. His accessories include a printed 1×2 cell phone tile and a printed menu piece. 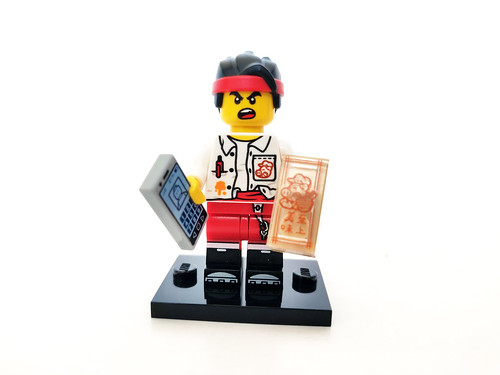 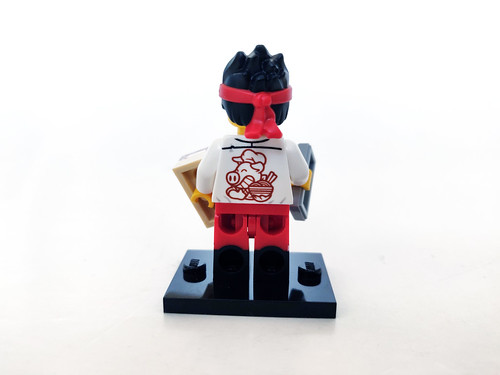 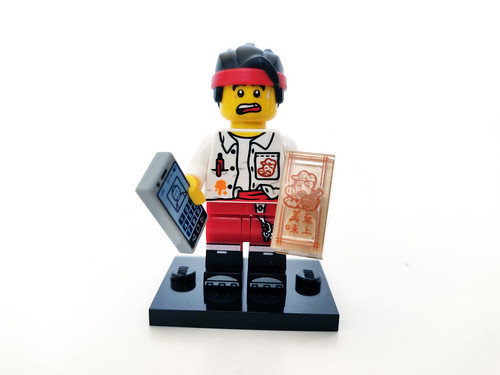 Pigsy has on a chef jacket that has a towel hanging around his neck. Like with Monkie Kid, the back of his torso has his logo on it. His head is specially molded for his character and he wears a chef hat. His accessory is a rake. 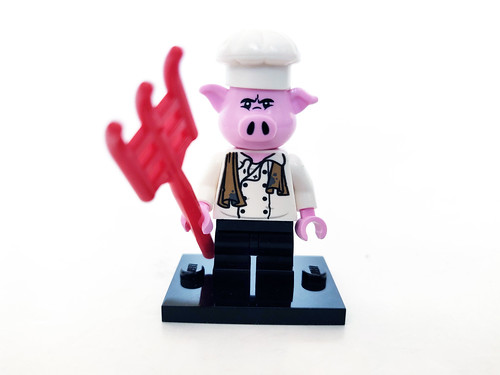 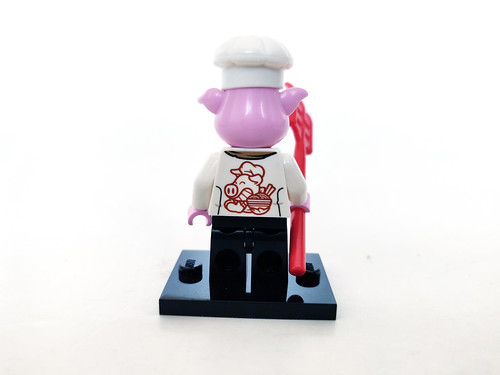 Uncle Qiao has a red shirt with tie and suspenders with light blue pants. His double-sided head shows him with a happy expression on one side and a puking expression on the other. His accessories include a suitcase and a hotdog. 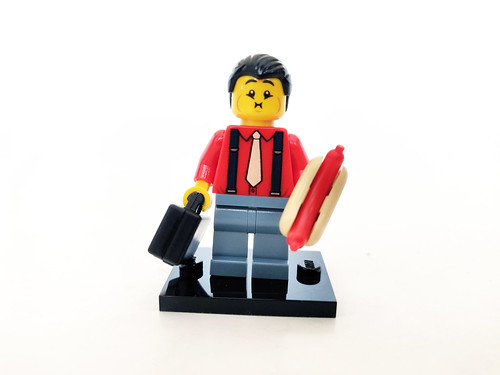 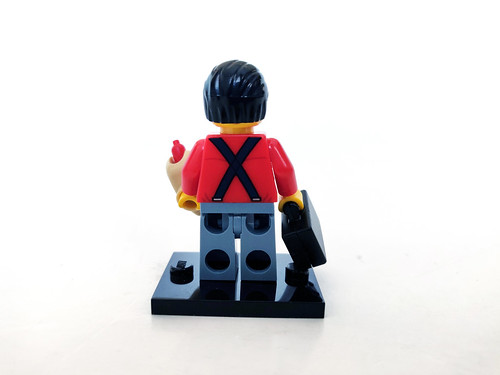 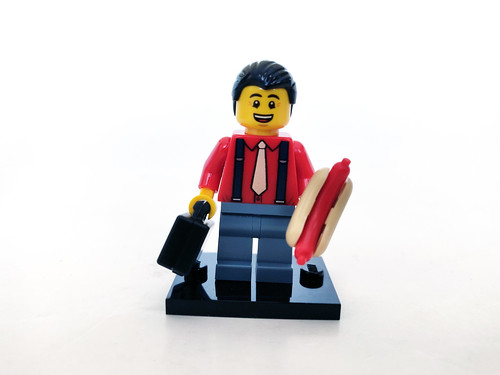 Like with many of the Bull Clone army, Snort and Grunt are exactly the same. One of them does have and axe as well as a stud shooter. 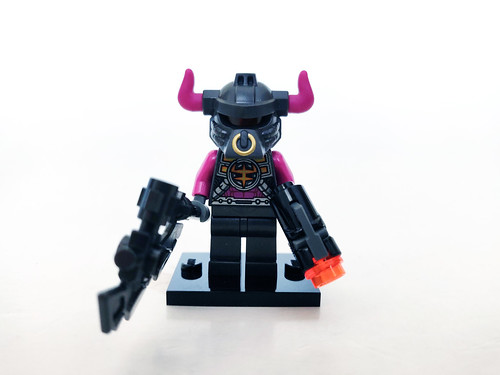 The first part of the build is for the Bull Clone motorcycles. The titanium metallic fairings for the bikes are brand new and are only currently found in this set. One of the bikes has a chain on the back with some stolen food from Pigsy. 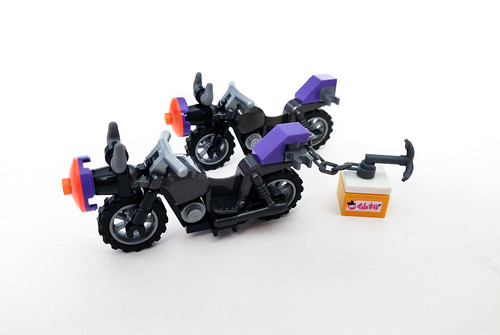 The second bag is for the frame of the food truck which is mostly a Technic frame. There’s nothing too special about this. 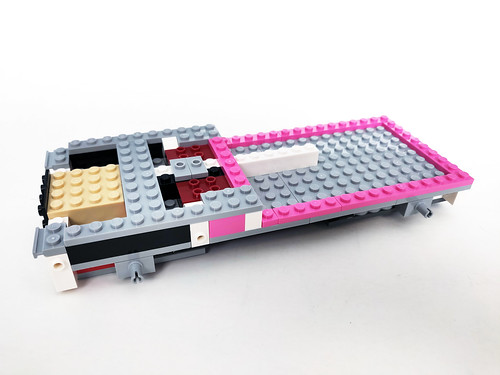 The next bag fills out most of the front part of the truck. The engine area doubles up as a grill for some hot dogs which is pretty funny to see. The hood has a large sticker showing Pigsy’s logo again. 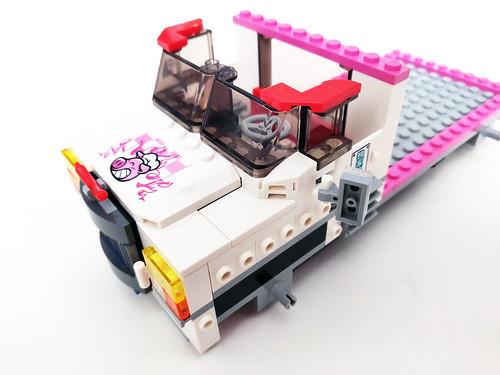 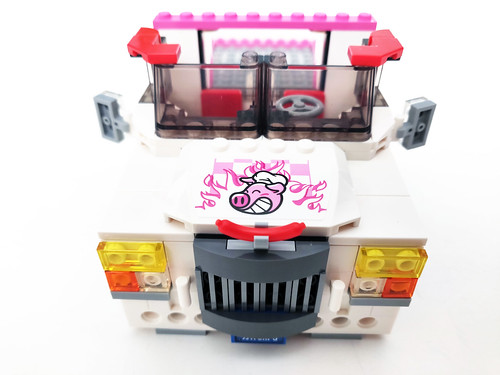 Next up, we finally get to start filling up the kitchen area of the truck. In the middle, we have the grill which can be turned over to reveal a computer panel. Next to the grill is a storage area with with two boxes. 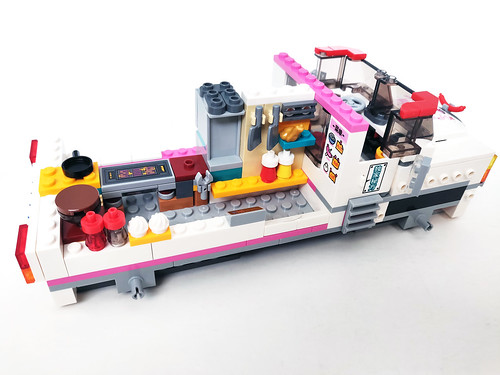 For bag 5, we have the roof of the truck which also doubles up as a secret monitor screen for the computer. This is just a sticker that is applied to the door that swings down. Lastly, there’s a fridge which doesn’t hold any food but is used to store some weapons. 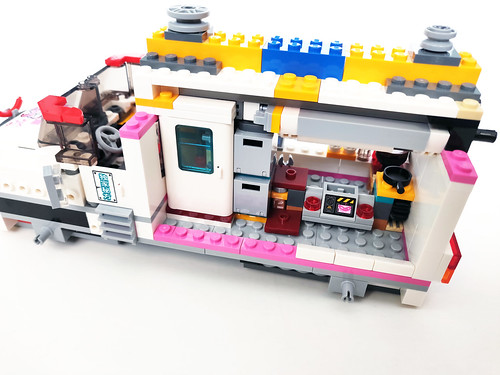 Bag 6 is dedicated to building the side panels for the food truck. They use Technic pins to attach to the truck which allows them to swing up with ease. The panels are heavily decorated with stickers including the the large one that spans the majority of the door. The main sticker shows Pigsy’s Noodle Shop and the surrounding signs translate to discounts given and the best shop around. 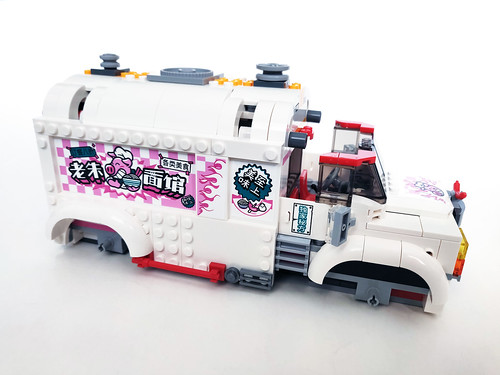 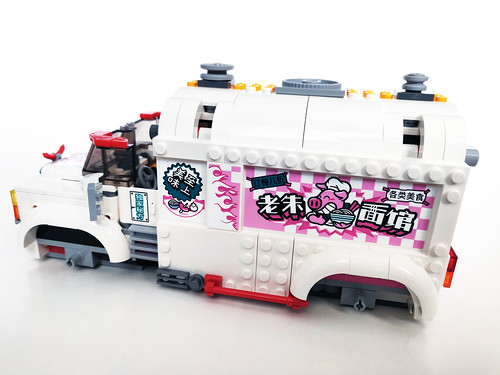 Bag 7 fills out the front of the food truck including the roof of the cabin and the red grill which doubles up as a large rake similar to Pigsy’s weapon. The rake is basically made up of Technic axles and pins connected to each other. The back of the truck has a couple of fans. 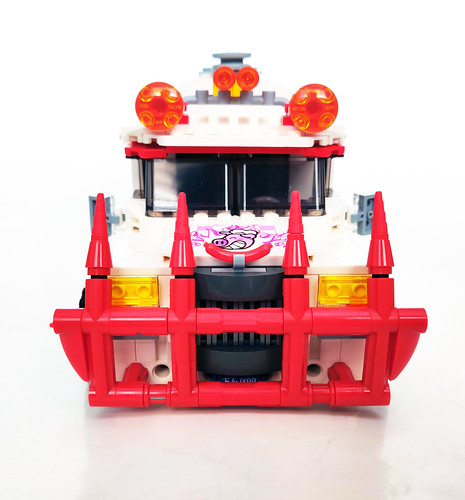 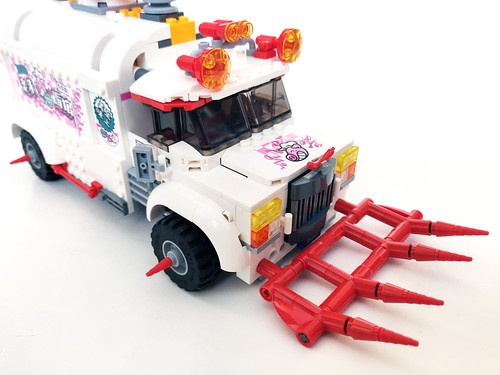 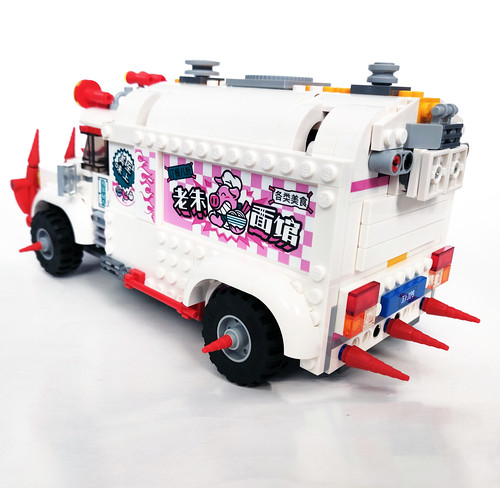 Finally, the last bag lets you build the pig on top of the truck which is a six-stud rapid shooter. It would’ve been nice if the pig had some eyes because it looks weird without them and is one of the few times that I would prefer some stickers. The stud shooter works when you turn the tail and it works great. 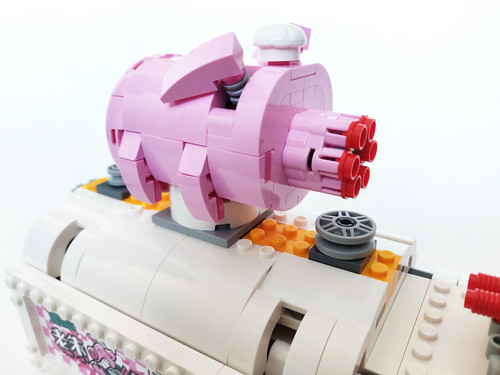 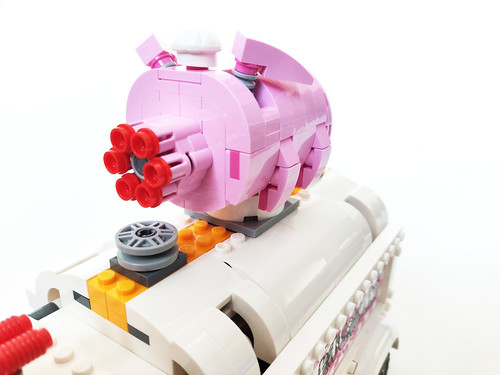 As I mentioned it before, the LEGO Monkie Kid Pigsy’s Food Truck (80009) is probably my favorite set out of this wave. I really like the aesthetics of it from the fold out panels to the huge rake in front of the truck. Although there are a lot of stickers, they do work very well with the truck as it gives it character. It’s not usual for LEGO to have a ton of printed pieces for a set at this price range. The play features are hit and miss but I do like the secret area inside the truck with the computer and fridge. 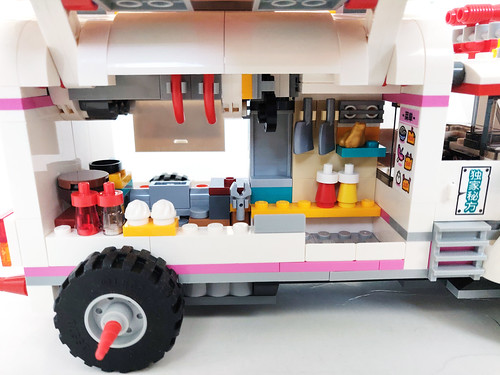 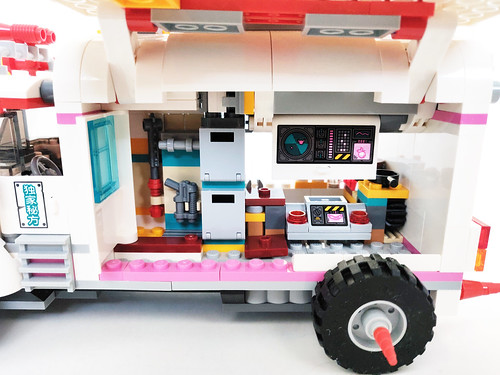 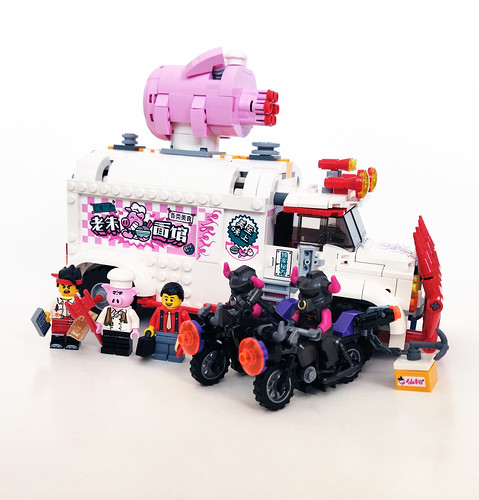