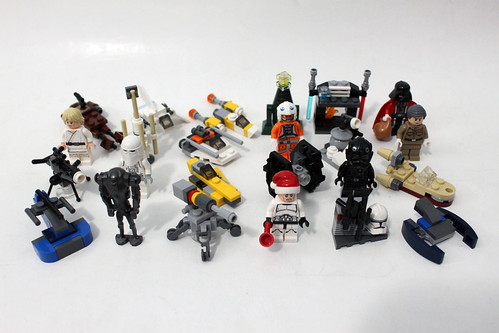 The LEGO Star Wars 2014 Advent Calendar (75056) is been completed but not without its faults. Here’s a recap on what was good about the Advent Calendar as well as the bad.

There are many miniature models as well as minifigures that were a pleasant surprise for this year. Luke’s Landspeeder on Day 12 is probably my favorite model for 2014. The design of it was spot on and it was very hard to top. The speeder on Day 19 was another build that I liked. Making it into a sleigh-type vehicle and incorporating Santa’s satchel was an interesting move on LEGO’s part.

Some of the minifigures that I liked were the Festive Astromech Droid on Day 22, the Rebel Pilot from Day 16, and General Rieekan on Day 18. Of couse we have Santa Darth Vader on the last day of the Advent Calendar.

Unfortunately, there are also bad things that went along with the LEGO Star Wars 2014 Advent Calendar. One of these miscues was the reuse of the Y-Wing from Day 21. There are numerous vehicles in the Star Wars Universe but LEGO decides to reuse the same model from three years ago. Another thing that I wasn’t into was the Super Battle Droid from Day 2. Every year either they or the regular Battle Droids seem to make their way into the calendars. Some people may like them, but I’m not.

Overall, the LEGO Star Wars 2014 Advent Calendar (75056) was an above average one compared to previous years. The 2011 version is still my favorite one but this year’s version is probably the second best so far. There is a good selection of miniature models as well as minifigures to back up that rating.

As we mentioned quite a few times, the LEGO Advent Calendars start showing up in August/September so if you waited until the last minute to get one, you were probably out of luck. For next year, I expect the same situation as they become more and more popular with kids as well as adults. YOu can probably find one on discount now at various retailers if you can find one.