The LEGO The Hobbit Barrel Escape (79004) is the second Special The Hobbit Trilogy Preview Set with the other being the Escape From Mirkwood Spiders (79001) set. This means that this particular scene will take place in the second movie, The Desolation of Smaug. This set contains 334 pieces and retails for $39.99. That comes out to $0.14/piece. The box contains two numbered bags and one instruction booklet. This set is a LEGO store, [email protected]

, and a Toys R Us exclusive. 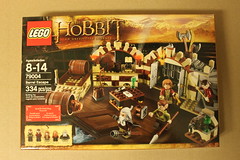 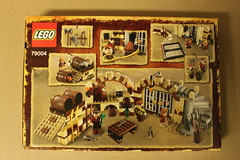 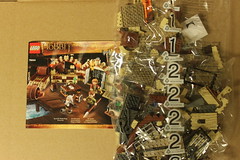 There are five minifigures in the set: Bilbo Baggins, Oin, Gloin, a Mirkwood Elf Chief, and a Mirkwood Elf Guard. All the minfigures except for Bilbo and the Mirkwood Elf Guard are exclusive to the Barrel Escape set. The Bilbo Baggins minifigure in this set is the exact same as in the Riddles For The Ring (79000) set. His outfit is is the green shirt and red jacket with short tan legs. He has a double-sided face with the stern and scared expressions. His accessories is the One Ring and Sting. 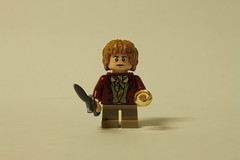 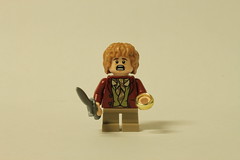 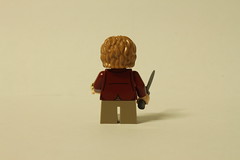 Oin is the brother of Gloin and uncle to Gimli. He has a brown torso with printing on both sides and short tan legs. He also has a short grey cape. Oin has a stern and angry faces but you can’t see them due to them being covered up by the white hair/beard headpiece. He has a staff as his accessory. 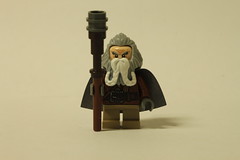 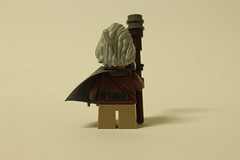 Gloin is the younger brother of Oin and father to Gimli. He has a red torso with brown legs. Like Oin, Gloin also has the stern and angry faces and like his brother, you can’t see the expressions because of the beard/hair mold. His accessories are a large battle axe and a smaller axe which are eventually passed down to Gimli. 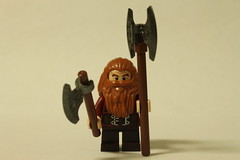 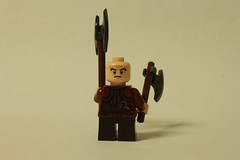 The Mirkwood Elf Chief is in charge of watching the captured Dwarves. He has red clothing for the torso and some printing on the legs. He has a worried expression on one side of his head and a drunken happy look on the other side. His has long brown hair with the Elvan ears attached. His accessories are a cell key and an Elvan sword called a lhang. The sword is the same one you get with the Elrond minifigure. 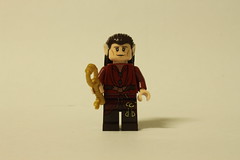 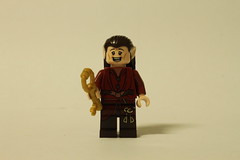 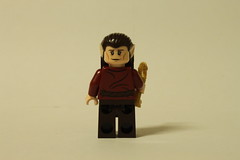 The Mirkwood Elf Guard is almost the same minifigure as the polybag version. The only differences is this variant does not have the dark hood, the bow and arrow, and quiver. This version has long brown hair and a spear as his weapon. 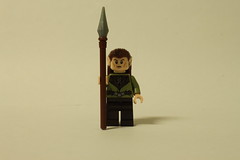 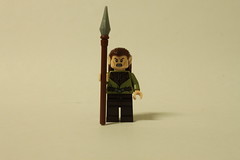 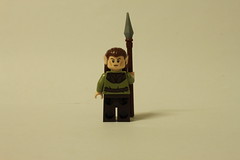 In the first part of the build, you create the beer cellar area as well as the ramp area where the barrel the Dwarves use to escape rest. The barrel ramp has a lever to drop the barrels which is how Bilbo helps Oin and Gloin escape into the river, hence the set name, Barrel Escape. In the cellar area, there is another barrel with a tap spout as well as bottles. 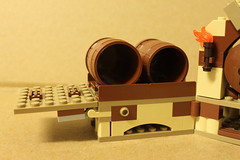 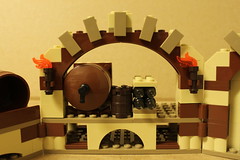 The next part of the build is the prison cell area and some stairs to the top of the cell. There is a lever here as well to break out the prisoners from the back of the cell. The spiral stairs are similar to the ones in the Hogwarts Castle set. 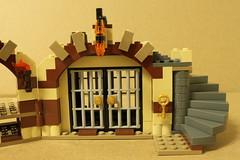 The final part of the Barrel Escape set is some small decorative pieces for the area. Here is a weapons rack with holds two lhangs and a bow and arrow. Next is a small table with some bottles, a green goblet, a letter, and chairs. Finally, there is a small barrel stand. 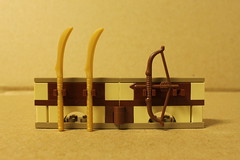 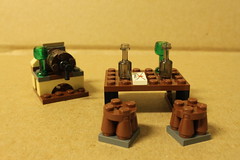 The Barrel Escape set is pretty nicely designed. There are some some play features but I feel that is set would make a better display piece. There are also many useful pieces for people to use though. I think the main attraction of the set are the minifigures and the weapons that are included. 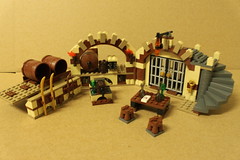 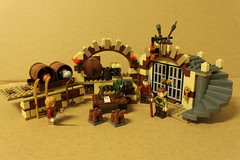 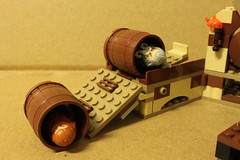 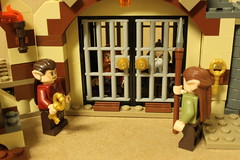 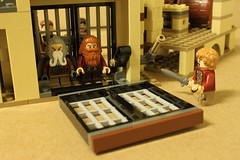 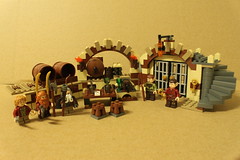 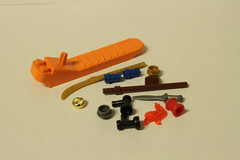