We’ve had a good run of good builds the past few days of the LEGO Star Wars 2012 Advent Calendar (9509). Can we continue this positive trend on Day 11? 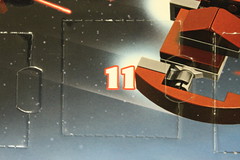 With the LEGO Legends of Chima sets not even released yet, there are already set names and numbers for the 2013 Summer wave. The action figures listed are probably similar to the LEGO Super Heroes Ultrabuild figures.

If you’ve been searching for the Space Marines LEGO CUUSOO project by Nick Royer, you’ll see that it’s been taken off the site…temporarily. According to LEGO, the name is trademarked buy another company and have requested that LEGO stop using it. After doing a little research, Games Workshop owns the name “Space Marines” and LEGO is obligated to agree to the other company’s wishes. Although the project is removed at the moment, LEGO has been in contact with Nick to choose a new name for the project. When a new name is chosen, it’ll be back online and and continue on in the Winter Review. Below is the official statement from the LEGO CUUSOO blog:

Hi LEGO Fans. You’re probably wondering what happened to those awesome-looking space military guys on LEGO CUUSOO; you know, the ones that reached 10,000 supporters just before the Winter Review deadline. Well, the name of the project used by the fan builder is actually a trademark owned by another company, and they requested we stop using it on our site.

While we let you submit projects that refer to trademarks owned by others, we don’t enforce others’ trademarks ourselves. However we are legally obligated to comply when we receive a request from a rights holder to remove their trademarks.

Since all of you voted the project to 10,000, and since the artwork is original and based on LEGO elements, it’s our opinion that the only trademark infringement here is the use of the name. So, we’re in contact with NickRoyer to pick a new name and continue to consider the project in the Winter Review. We hope to have it back online soon with the new name.

Sorry about the surprise, and happy building!

Update 1: The products that have claimed the phrase “Space Marines” are the Warhammer 40,000 characters which have been used since the early 90’s. The name will also be used in a brand new game named “Space Hulk” which features

…a team of heavily armoured Space Marines stomp through the infested carcass of an immense spaceship, ripping its chitinous inhabitants to shreds with mighty bolters or otherwise meeting a grisly fate themselves. 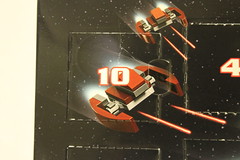 In the final set of the initial LEGO The Hobbit line, we review The Goblin King Battle (79010). The set contains 841 pieces and retails for $99.99, about $0.12/piece. There are three instruction booklets, five numbered bags, and a packaged Goblin King. 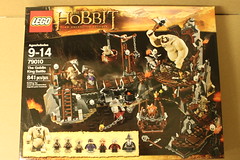 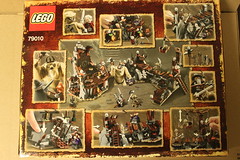 Continuing with our updates of the LEGO minisites today, the LEGO Legends of Chima minisite also has a small update. There is a new image update of Laval, Prince of the Lion tribe, riding in the vehicle from the Ultimate Tournament (70115) set. There is also a video at the bottom of the page introducing Laval. The sets for the Legends of Chima are expected to be released in a few short weeks.

LEGO has been releasing minisites left and right the past couple of days including The Lone Ranger and Teenage Mutant Ninja Turtles. The new Galaxy Squad is also another theme that gets their own minisite. Unlike the others, this minisite has some interactivity including an animation with the Vermin Vaporizer

and a Whack-A-Mole type of game called Cocoon Crusher 9000. The object of the game is to free the Galaxy Squad from cocoons by shooting at them. The game gets progressively faster as the levels get higher but it starts to get repetitive at round 7. You get 3 lives and if you don’t free the Squad in time, the game is over. There are also some unreleased content on the minisite which includes another web game called Bug Battle and another tab to link to the Apple iOS version of the same game. Check it out new Galaxy Squad minisite and have some fun with the game.