A lot of LEGO Ninjago fans have been waiting for this since the news broke out a couple of months ago that the line will be ending soon. The 2013 wave of the Ninjago sets are now available on Amazon except for Cole’s Power Drill (70502) and the Golden Dragon (70503). There is free shipping for orders over $25. These sets will definitely make great Christmas gifts.

Help the ninjas to collect the 4 elemental blades and awaken the mythical golden mech! Lord Garmadon has sent his scout to snatch the elemental blade of fire from Kai but Kai is ready and waiting in his mighty Fire Mech! The scout’s crossbow weapon is no match for the mech’s huge double-edged fire blade and impenetrable armor. Battle for control of the elemental fire sword! Includes 2 minifigures with weapons: Kai and scout.

Lord Garmadon’s warrior is in hot pursuit of Jay and the elemental lightning blade. If the warrior takes it to the underworld, the ninjas will never be able to unite the 4 elemental blades and awaken the golden mech to stop Lord Garmadon forever. Help Jay to outrun the Warrior Bike’s quick-fire missile launcher by firing up his rocket pack and escape. Includes 2 minifigures with weapons: Jay and warrior.

Can you believe we now have less than 10 days until Christmas? Take a look at what’s next for the LEGO Star Wars 2012 Advent Calendar (9509). 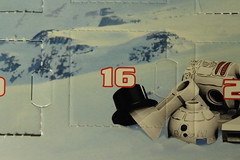 2013 LEGO Super Heroes For Sale on Amazon US

A couple of the new 2013 LEGO Super Heroes sets have finally reached Amazon in the US. The LEGO Marvel Super Heroes Spider-Cycle Chase (76004)

are now available for purchase. Both are priced at $19.99 each.

We’ve gotten many different types of builds so far in the LEGO Star Wars 2012 Advent Calendar (9509), ranging from ships, to minifigures, to random things. What do you think we’ll be getting for Day 15? 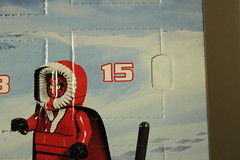 Amazon now has a few of the new LEGO Star Wars 2013 sets available for sale. The A-Wing, Z-95 Headhunter, BARC Speeder, Umbaran MHC, as well as the Planet sets haven’t been listed yet.

Yesterday for the LEGO Star Wars 2012 Advent Calendar (9509), we got a cute looking Gonk Droid. Will the cuteness continue for today’s build? 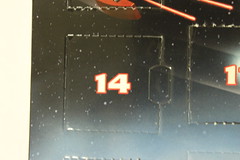 The Brick Blogger has posted some events that LEGO will be having as promotions for the release of the Legends of Chima theme.

Starting January 26, LEGO will be having an in-store tournament involving the Speedorz sets called the LEGO Chima Challenge. Participants will compete against each other to become the CHI Champion. A Chima poster will be given out to participants while supplies last.

The promo that will have people flocking to LEGO Stores and [email protected] is the FREE Legends of Chima set. The set, which will probably be a polybag, will be an exclusive gift with a $75 purchase and the promotion will be available January 1-31, 2013 while supplies last. It does not state that you have to purchase just Chima sets to get the gift so any item(s) are eligible.

LEGO is definitely pushing the Legends of Chima theme throughout 2013 since Ninjago will be phased out after the final wave. What are your thought of the line and are you excited for these promotions?