There are about two weeks left in the year and for those who are still trying to get the LEGO Star Wars UCS Millennium Falcon (75192), here are some tips for you to potentially get one to get the exclusive Black VIP Card before the end of 2017.

[email protected] is pretty much out of the question as there has been very low quantities on-hand online for a short period of time. Your best chance to get one is if you live close to a LEGO Brand Store. Either call or visit them and check if their waiting list for the Falcon is close to being done. I’ve have a few reports from readers that say their stores (Palisades Mall for one) have completed their lists and the Falcons are now on a first-come, first-served basis. If they do have some in stock, ask if they can put it on hold and you can hop over there to pick it up. If not, check when their next shipments are and it’s possible there may be some on the trucks. Also you can ask to be put on the waiting list if the stores are still doing them for the next ones that come in.

It’s unfortunate that the Black LEGO VIP Card is only available with a purchase of the UCS Millennium Falcon because there was so much demand and very little quantities for fans, there’s no way that it will pass the reported 30,000 number of cards that are available. Hopefully LEGO will extend the promotion … Continue

In an unexpected surprise, the LEGO Star Wars UCS Millennium Falcon (75192) is now available again on [email protected] in Europe and Australia for VIPs. As of this writing, it is still available for purchase but you have to be signed in to your account. This is probably the last chance to get it this year and also score the exclusive black VIP card. There’s still no word on when the US will have it available again.

If you are a LEGO VIP member, you may have received an email from LEGO regarding the availability for the new LEGO Star Wars UCS Millennium Falcon (75192). They have extended the VIP only access period through November which means that you must be a VIP member to be able to purchase the set. This also means that the general public won’t be able to purchase it on October 1 since they announced earlier that it will still be temporarily out of stock then. If you’re not a LEGO VIP member, I’m not sure why not, you can easily sign up online.

LEGO has also suggested that you call or visit your nearest LEGO Brand Store starting tomorrow to get put on the wait list for when shipment arrives at the store. Of course, there’s no way of knowing how many sets they will get per shipment so try to get on that list early for a higher chance to secure one.

As you may know, the new LEGO® Star Wars™ Millennium Falcon (75192), our largest LEGO set ever, went on sale exclusively to VIP Members on September 14. We are very excited that we received such a positive response from fans like yourself, it exceeded all of our expectations! Unfortunately, that also means the first batch has already sold out.

The good news is we are making more as quickly as possible and expect to have very limited quantities available for the remainder of 2017. We have extended the VIP-only access period, which means

The day is almost over and the main event today was the release of the LEGO Star Wars UCS Millennium Falcon (75192). It was available on [email protected] shortly after 5am PST which was around the time that LEGO stated it would be released. After it was actually available, [email protected] basically couldn’t handle the load and it kept going down. Other issues with it include logging people out, servers going into maintenance, multiple orders placed, etc. After that, the set went into backordered status, and eventually temporarily out of stock. If LEGO didn’t announce an actual time for the release and just put it live at an arbitrary time, I felt that it would have eased the overload on the servers.

For those who were waiting for the general release on October 1 or Double VIP Points from October 10-25, you might be out of luck as well. Over on LEGO’s customer service page, there’s a a topic for the Millennium Falcon and there’s an interesting blurb which says,

75192 Millennium Falcon™ goes on sale from October 1st 2017, however due to the overwhelming success of our VIP Early Access, it will remain temporarily sold out.

This means that LEGO will not have stock for the general release which is actually surprising since there was plenty of hype for it way before today and they obviously knew that there was a huge demand for it but probably underestimated how much demand it really had.

The new LEGO Star Wars UCS Millennium Falcon (75192) was released earlier today and if you were able to checkout, prepare for something massive. I received my review copy on Monday and have been building it for the past few days. I’m 10.5 hours in and I’m only currently up to bags numbered 7 out of 17 so this will be a daunting task. Since it’s so large, I’m going to try to break up the review into several parts. Here’s a quick unboxing of this beauty of a set.

As you saw from the official images, the box is huge. Forgive my crudeness of the images but my photography studio isn’t big enough to support the box and most likely won’t fit the Falcon after it’s been completed.

On one side of the box, you have a little a little blurb about the Millennium Falcon in various languages. There’s also a couple of stickers with a crossed out knife meaning not to open from this end. 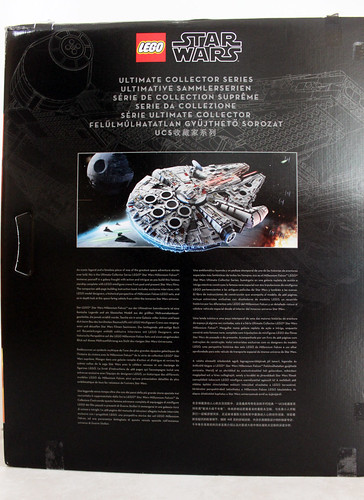 On the opposite side of the box, you have a very nice looking blueprint as well as a line of the minifigures that are included with the set. 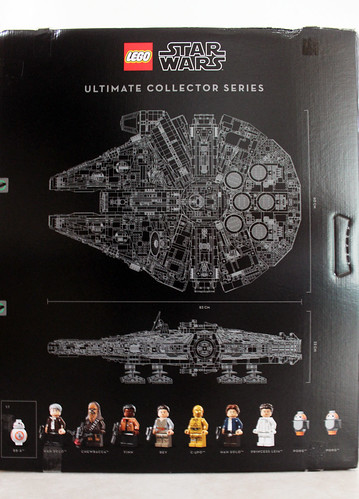 When you open up the box, you are greeted with a large sprial bound instruction manual that sits on top of a cardboard so it won’t get crushed during transit. … Continue

The long-awaited LEGO Star Wars UCS Millennium Falcon (75192) is now available for purchase on [email protected] The 7,541 piece set will be the most expensive set to date coming in at $799.99. As I stated before, the set may be very limited at release, particularly at LEGO Brand Stores. I’m not sure how much stock there will be online but we’ll see how long it lasts.

For those who are lucky enough to be able to purchase the new UCS Millennium Falcon, you will be getting an exclusive black LEGO VIP card will will be mailed to you at a later date. This card will have special LEGO Star Wars promotions tied to it next year. This promotion will run until the end of 2017.

If you decide to take the plunge, you’ll have to be logged in as a VIP member to be able to add it the shopping cart. Feel free to use our links as it does help support the site.

Travel the LEGO® galaxy in the ultimate Millennium Falcon!

Welcome to the largest, most detailed LEGO® Star Wars Millennium Falcon model we’ve ever created—in fact, with over 7,500 pieces it is the biggest LEGO model ever sold! This amazing LEGO interpretation of Han Solo’s unforgettable Corellian freighter has all the details that Star Wars fans of any

When the LEGO Star Wars UCS Millennium Falcon (75192) was announced last week, some fans were wondering if there was anything exclusive that was included with the set. The first edition of the original 10179 Millennium Falcon included a Certificate of Authenticity which was signed by former LEGO president Kjeld Kirk Kristiansen and Product Designer Jens Kronvold Frederiksen.

We haven’t heard anything about anything exclusive during the press release but it looks like Zusammengebaut has gotten some new information about something that will be included. If you saw my post of the brochure, the back of it shows a black LEGO VIP card which might have been a hint. According to a German [email protected] ad, it seems that fans who are buying the set at LEGO Stores or on [email protected] when it is officially released on September 14 for Early Access will also get a limited edition VIP card.

Whether that same promotion carries over to here in the US remains to be seen. I also wonder if there’s anything special printed on the back of the card or if it’s just a regular VIP card that we can use. We’ll just have to wait for our LEGO email or until the [email protected] is updated to see if we get the same thing as our friends in Germany.

Update: I’ve been told that it will indeed be available here in the US. It is available to the customers who purchase the UCS Millennium Falcon until the end of 2017 and it will be mailed to … Continue