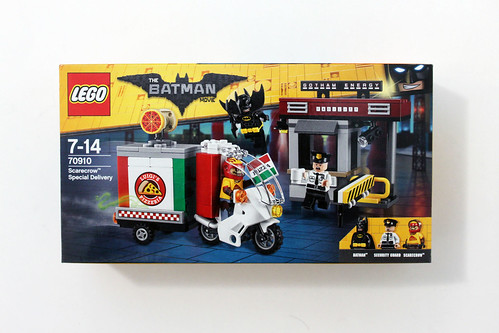 Continuing with my reviews of The LEGO Batman Movie sets, the next one I’ll be doing is the Scarecrow Special Delivery (70910). This set contains 204 pieces and retails for $19.99. The contents of the box include two numbered bags, the instruction booklet, and a small sticker sheet. 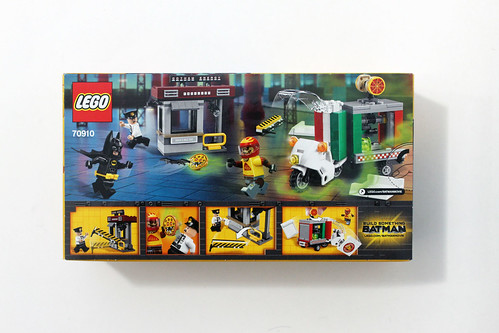 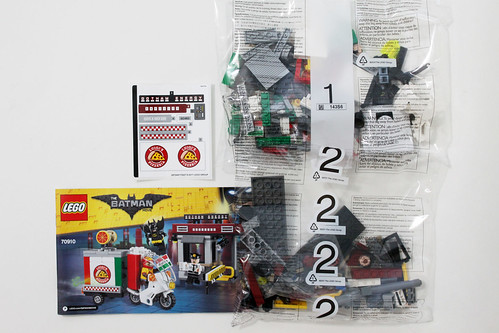 There are three minifigures in this set: Batman, Scarecrow, and a Security Guard.

The outfit for Batman is pretty much the same as before with the standard black and the new yellow utility belt piece that goes between the torso and legs. The expressions for Batman include a smirking one and an angry one. His accessories are his trusty Batarangs. 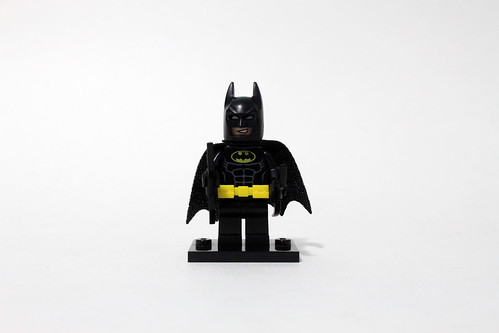 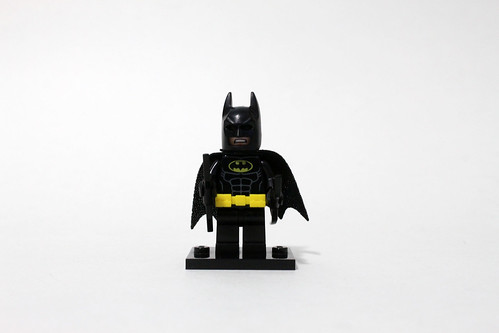 Scarecrow will be making an appearance in The LEGO Batman Movie and from the looks of it in this set, he might be disguising himself as a pizza delivery. His torso is a yellow t-shirt with Luigi’s Pizza logo on the front. The arms are double-molded with the forearms showing his true outfit. The legs are some tattered jeans with more of the Scarecrow’s outfit hanging out. He has a double-sided head but it varies just slightly with the open mouth side. He also wears a red motorcycle helmet with some flame deco on the top. 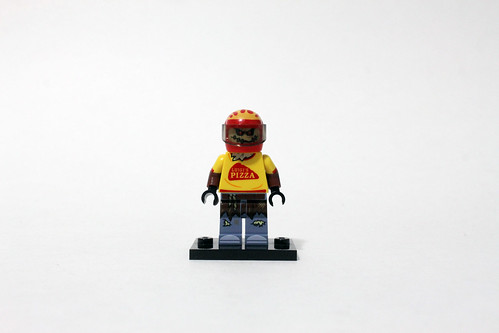 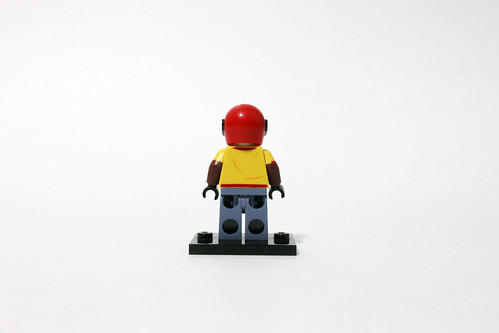 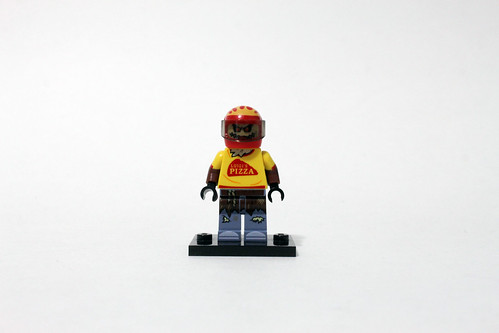 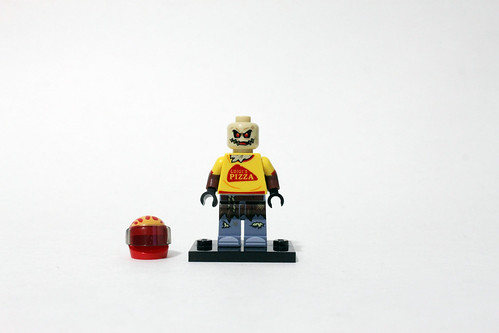 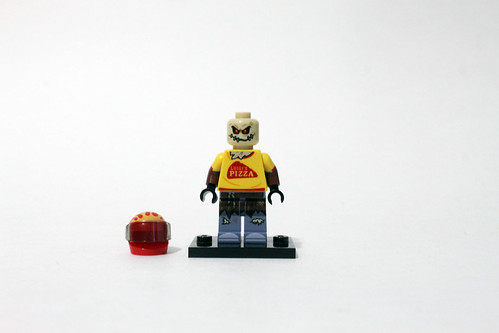 Finally we have a generic security guard. The torso is similar to what you see a guard wearing. This torso could be very useful in City layouts. The most interesting part of the security guard is that instead of having a double-sided head, he has two different sets of heads with a slightly terrified expression. One of them has him with some sweat across the head. 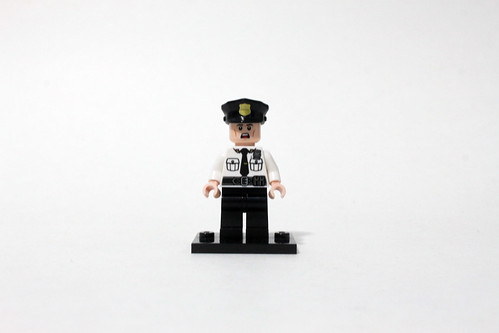 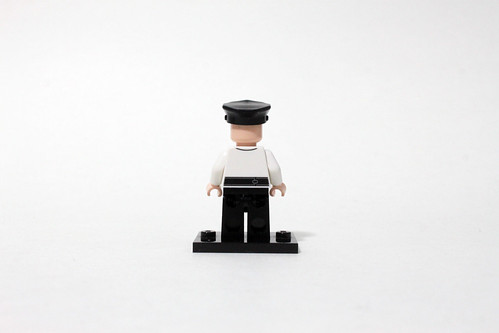 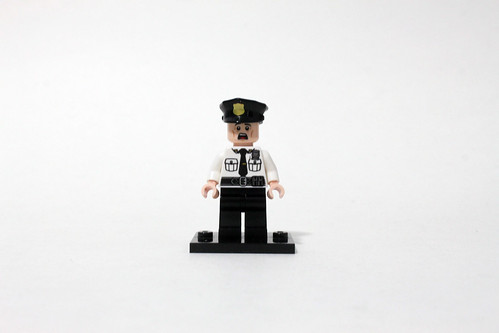 For the build itself, there are two different builds, the pizza delivery bike and the security guard booth.

The pizza delivery bike is pretty much plain white with some red and white at the hitch area. The cart itself is more interesting part of the bike because it hides a little secret inside. On the sides, there are a couple of panels with the “Luigi’s Pizzeria” logo which are stickers. These panels have a play feature that I’ll get to soon. The back door can open up to see the inside as well as to store a printed 2×2 pizza box tile as well as a printed 2×2 round scarecrow pizza tile. The license plate one the bumper reads “SC4R3” which is just the word SCARE. On the top of the cart, there is a function that turns to pop open the panels on the side. What is revealed is a secret so far but it is a lime green ice cream scoop encased in a trans-green glass case. 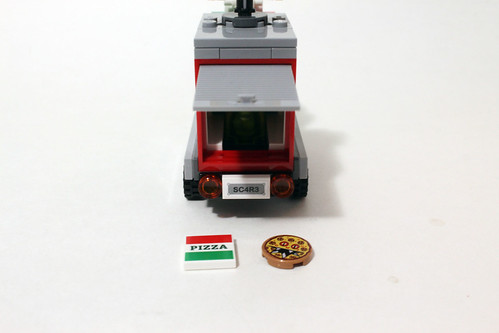 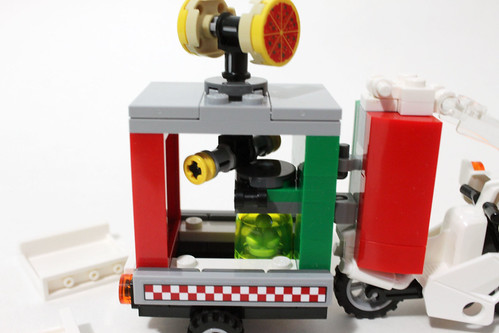 The other part of the build in the Scarecrow Special Delivery set is the little security guard booth for the Gotham Energy Facility. The left wall has a small window with a lamp hanging over it. The front has a larger 4×4 window under an awning. Below the window are the words, “HAVE A NICE DAY.” On the right side, there’s a security camera as well as another small window. The gate uses some printed 1×4 tiles with the caution stripes. The inside of the booth is pretty bland with only a table for the coffee cup and a stickered control panel. One thing to note is that there is hinge on the backside so that it can expand with the combination of The Joker Balloon Escape (70900) and Mr. Freeze Ice Attack (70901). 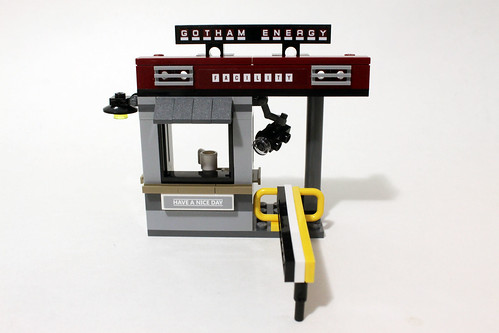 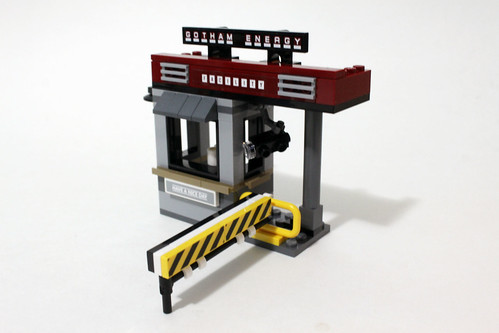 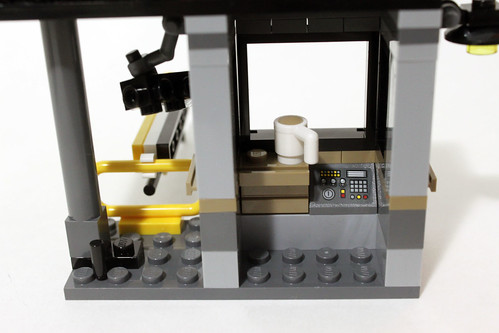 Overall, The LEGO Batman Movie Scarecrow Special Delivery (70910) is somewhat of a subpar set. The main attraction of the set is the Scarecrow minifigure and maybe the security guard. The pizza delivery bike is a little disappointing although I am curious of what is hidden inside since there’s no context from the trailers as of this time. The expanded playability of combining this set along with some others bump up the score but by itself, the set doesn’t do as well. Unless you are wanting the exclusive Scarecrow minifigure, I would recommend holding off on getting this set until it is on sale. 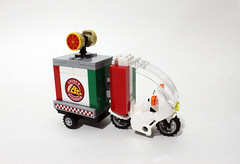 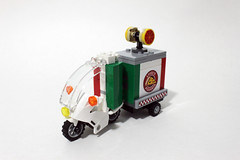 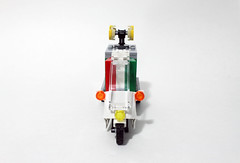 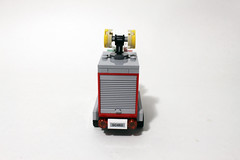 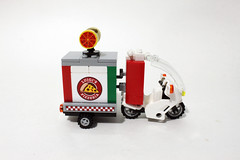 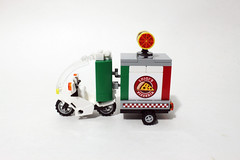 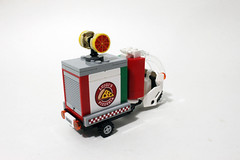 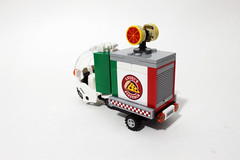 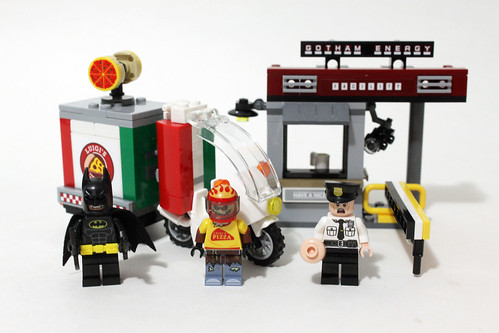