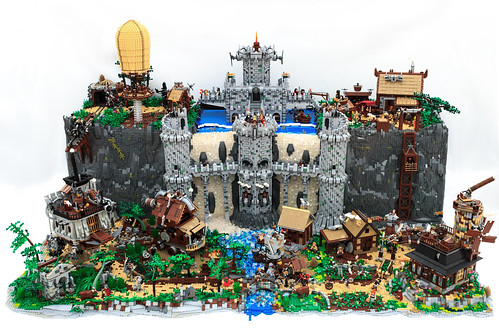 Yesterday, I posted a list of potential 2016 LEGO sets and at the very top of the list was a thing called LEGO BB or “Big Bang.” Not to be confused with the LEGO Ideas The Big Bang Theory (21302)

, “Big Bang” is an internal term used by LEGO for a new IP that has a major media campaign to go along with it much like Ninjago from 2011 and Legends of Chima in 2013.

This takes us to 2016 where we’ve been given various hints and specualation on what this new theme is. First we have Amazon where there is an Activity Book

and a Mini Guide

which gives the description:

So we know that there is indeed a new theme coming in 2016 but what could it be? I’ve reported before there was a rumor of a LEGO Castle Fantasy Era theme. That rumor has slightly changed and word going around on Eurobricks is that there’s a new theme called “Space Knights” which is said to combine elements of both Castle and Steampunk.

As you may have seen on Flickr and MOCPages, LEGO Steampunk is a pretty cool subtheme that the community likes to dabble in. Heck, there’s even a whole book dedicated to LEGO Steampunk builds by Guy Himber who is one of the forerunners in the scene.

Again, this is whole LEGO Space Knights Steampunk theme is still speculation but there are some fairly reliable sources that may prove this theme will be coming in 2016. What are your thoughts on this new theme?

Note that the image above isn’t a set but a MOC created for Fana’Briques 2013.