The LEGO Movie: Everything is Awesome Edition Review

It’s been a few days since The LEGO Movie: Everything is Awesome Edition was released and I finally have some time to watch everything the package has to offer. This edition comes in a nicely packaged plastic box and it has a number of items including the Blu-Ray, the 3D Blu-Ray, the regular DVD, the Digital HD UltraViolet copy, the exclusive Vitruvius minifigure, and a collectible 3D Emmet photograph. It currently retails for $34.96 on Amazon 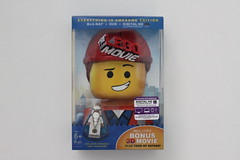 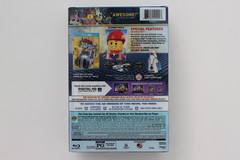 The Blu-Ray runs at a full 1080p HD at a 16:9 widscreen ratio with a 5.1 DTS-HD Master Audio track. You pretty much get best of what technology has to offer today. The visuals and sounds are very crisp and it’s what you would expect.

The 3D Blu-Ray was even better than the regular version and it was very similar to what I saw in theaters. The visuals of this version were extremely pleasing to the eyes. 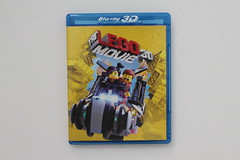 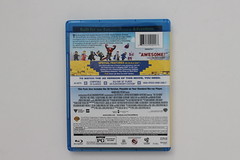 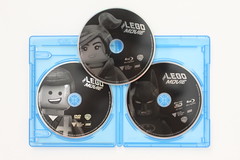 The Everything is Awesome Edition features a wide varity of extra bonuses on the Blu-Ray disc:

The audio commentary plays along with the movie itself and includes commentary from various cast members including Chris Pratt, Will Arnett, Charlie Day, and Alison Brie as well as from Phil Lord and Chris Miller. The commentary is the usual kind where the actors and directors tell you some insight on the movie but since this is The LEGO Movie, they are also cracking jokes left and right which is a nice step up from other commentaries I’ve listened to. Phil Lord and Chris Miller gave a ton of insight on how the movie was made and it shows how much effort the whole team put into it.

Batman’s A True Artist is pretty much a music video of his song, Untitled Self Portrait. The video is made with some stop-motion and uncut footage.

Michelangelo & Lincoln: History Cops is a short that we’ve featured before and it resembles a grindhouse spoof in which Michelangelo and Abraham Lincoln are crime fighters.

Enter the Ninjago is another short that was leaked/released early on YouTube before The LEGO Movie was released on Blu-Ray. In this short the Green Ninja (Lloyd Garmadon) takes over some pivotal scenes in the movie. When I first saw this feature, I thought it would be a teaser for the LEGO Ninjago movie coming out in a few years but it has absolutely nothing to do it.

Bringing LEGO to Life is narrated by Chris Pratt and it shows a behind the scenes look to what went on in making The LEGO Movie. The crew of the movie interacts with Emmet as if he was a real character from the storyboard to the voice actors and animators to Phil Lord and Chris Miller’s trip to LEGOLAND Billund.

The “Everything Is Awesome” Sing-Along is pretty much what it is. No explanation needed.

See It, Build It! is broken up into four different parts where LEGO Senior Designer Michael Fuller and Modeling Artist Adam Ryan teach you how to build various things from The LEGO Movie such as Emmet’s Double-Decker Couch and his car from LEGO bricks as well as on LEGO Digital Designer (LDD).

Dream Job: Meet the LEGO Builders is probably my favorite bonus feature out of everything that was included on the Blu-Ray. This featurette shows a number of LEGO’s Master Builders who helped design and create the sets and minifigures in the movie including Michael Fuller, Matthew Ashton, and Marcos Bessa. One of the challenges in the making the sets for the movie was to make them easily marketable products for the fans and I think they’ve done that perfectly. This feature is a definite must watch if you get the Blu-Ray.

The Storyboard is just early drafts of The LEGO Movie and it shows some ideas the writers and artists had. One of these drafts was King Carl’s Castle which was the land of forgotten parts and had rainbow guns and puppy guns. This idea eventually turned into Unikitty’s Cloud Cuckoo Land. Another draft was the backstory of Benny. Emmet and the gang somehow landed on the moon and there they meet Benny for the first time. They also note that Benny’s best friend is a mop named Moppy. They aren’t as funny but it’s nice to see what ideas the writers had before.

The fan made videos were from a contest on ReBrick in which fans had to make a short video that shows LEGO minifigures modifying structures in their environment to fight the bad guys. The third place winner was Unity is Strength by Pedro Sequeria, second place went to Garbage Man by Paganomation, and first place was Gorgy Wants a Horse by BrotherhoodWorkshop. Fans of LEGO stop-motion videos have probably heard these names before. You can watch those videos here.

The Outtakes shows various scenes from the movie in the characters’ perspectives which shows them going off script. We’ve already seen these outtakes before back when The LEGO Movie came out in theaters.

The additional promo content are some funny shorts that promoted the movie like the Chinese New Years clip, I’m Batman, and The LEGO Movie auditions.

The Alleyway Test is a short animation where the animators were testing the animation of the scene where Emmet and Wyldstyle escape the Melting Room and she builds the Super Cycle from parts found in the alley. It’s cool to see how far the scene came from production to the finalized version.

Overall, I still enjoy The LEGO Movie as I did a few months ago in theaters and the number of bonus content included with the Blu-Ray was a nice addition. If you’re a collector of the LEGO minifigures, the Everything is Awesome Edition

is the only way to get the prologue Vitruvius minifigure unless you want to pay at least $15 for it on BrickLink. The LEGO Movie: Everything is Awesome Edition certainly lives up to its name with all the exclusive content that was included and it is one movie that is a must-own for all families.

You can also read my spoiler-free review of the movie itself here. 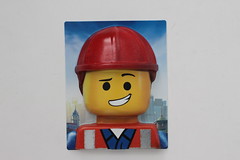 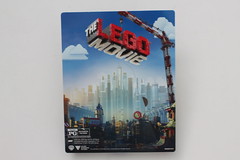 Everything is Awesome EditionLEGOReviewThe LEGO Movie