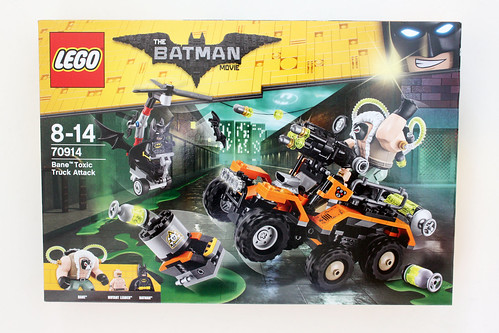 We’re winding down on my reviews of the summer 2017 wave of The LEGO Batman Movie sets and in my penultimate review, I have the Bane Toxic Truck Attack (70914). It consists of 366 pieces and retails for $49.99. Let’s see if the set has enough going for it to warrant that price point. 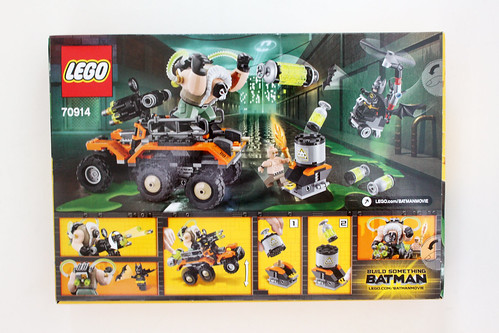 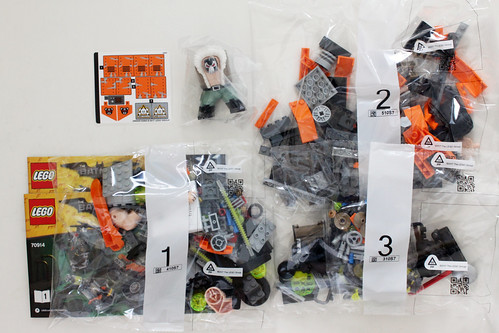 There are three minifigures that are in this set, Batman, Mutant Leader, and Bane. Batman is the same old minifigure that we’ve gotten before with TLBM sets. The double-sided head shows a grimace on one side and a disgusted look on the other. His accessory is the usual Batarang. 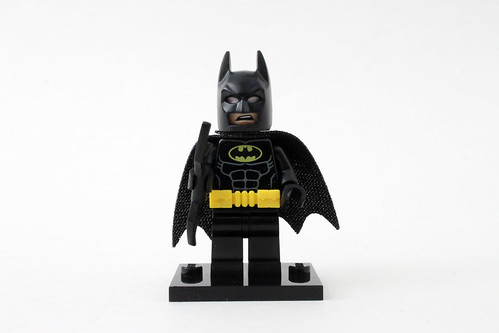 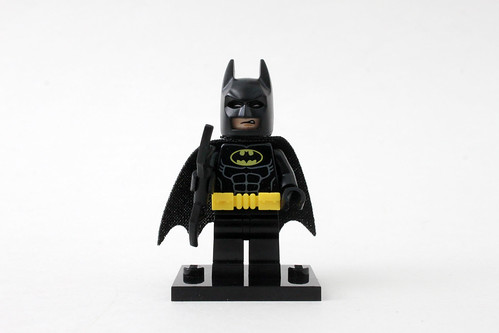 Mutant Leader is a fairly obscure character who first appeared in Batman: The Dark Knight Returns. In the movie, he had a fairly minor role as he was only seen for a short time as one of the Joker’s goons. 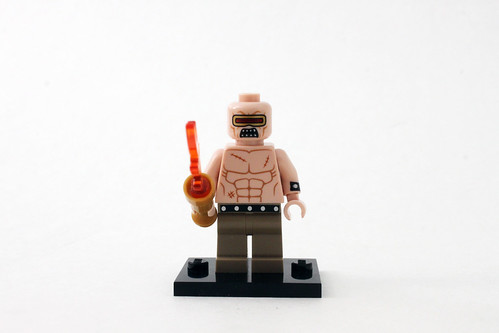 The torso is very plain as it only shows his muscles. There is some printing of wristbands on the arms. The legs are mostly tan with some belt printing on the waist. The head is the most interesting part of the minifigure with the visor over the eyes and the open mouth showing the sharp teeth. His accessory is a flame torch. 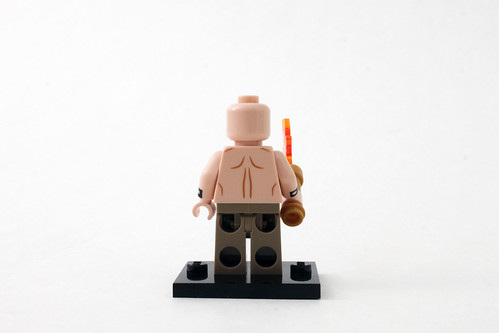 Finally we have the Bane bigfig and he looks great. Finally we get a bigfig version of him to show off his large stature. The head shows him with the black mask with the red eyes and silver breathing mask. For his body, he wears a tan sleeveless jacket with white fur lining. The legs are plain olive green pants with black boots. Bane also has the Venom backpack attached to his back. It’s just a small build that has some tubes that connect to his arms. 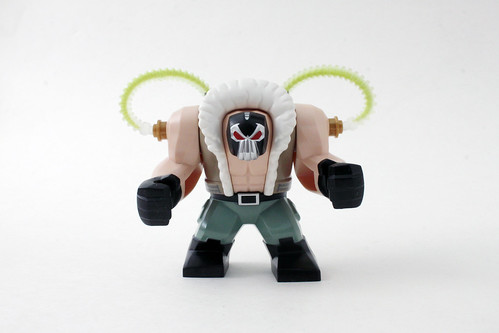 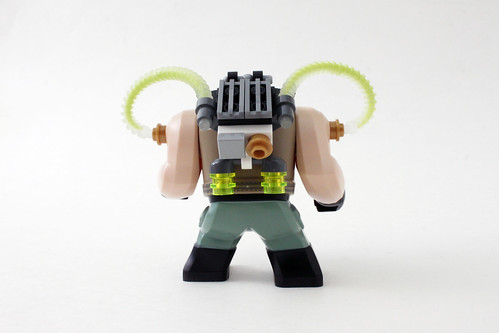 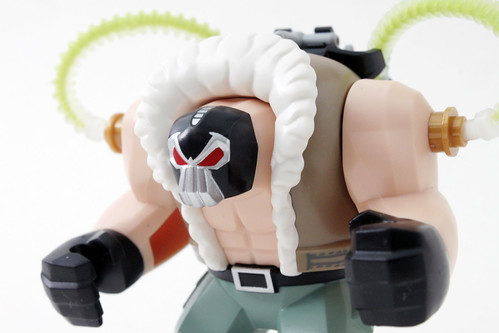 Batman’s vehicle in this set is the Whirly-Bat. It’s a simple one-person helicopter that looks fairly unstable. The propeller is just connected with some Technic parts. Some nice detailing on the Whirly-Bat are the bat wings that are clipped on in the back. 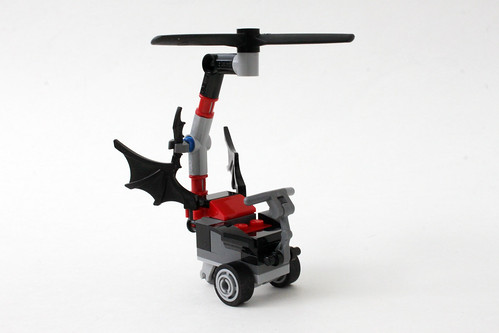 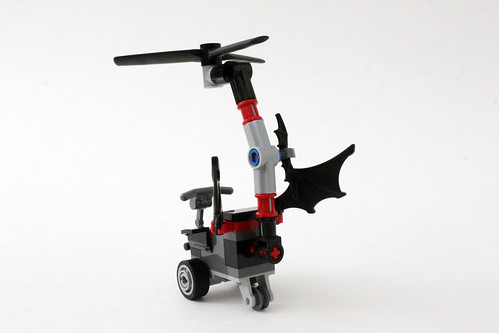 Another part of the build is the toxic waste build that has an exploding play feature. In the middle is the tank which holds some small trans-green toxic bombs. To make the tank explode, you press down on the 1×2 sticker hazard tile and it pops off the Technic axle. Some other detailing on the tank are the stickers of Ace Chemicals with a skull. 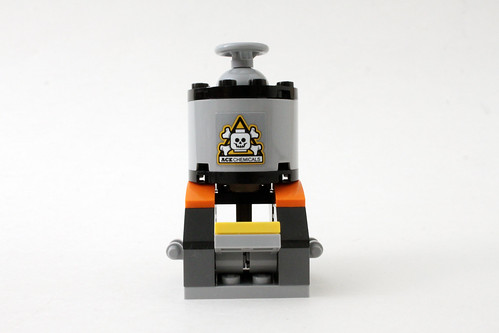 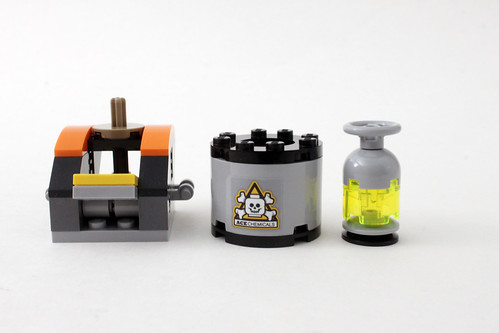 The main build of the set is Bane’s Toxic Truck itself. It has a very rugged look with the large wheels. Speaking of the wheels, the rear four wheels has a suspension feature ao that it can easily run over things. Some nice details here are the pearl-silver studs which represent the springs on the suspensions. 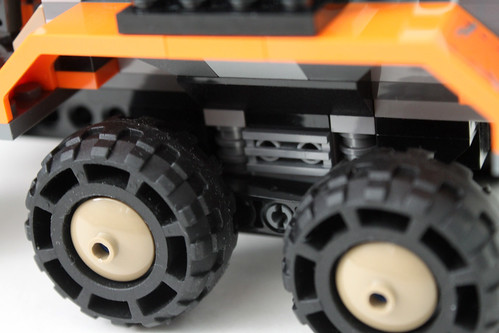 The main color scheme of the truck is mostly orange and black. There are stickers on all of the fenders to give it some rugged detailing. Next to the windshield are some orange flags with stickers of Bane’s teddy bear, Osito. 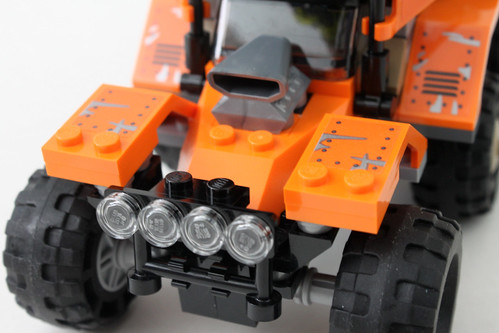 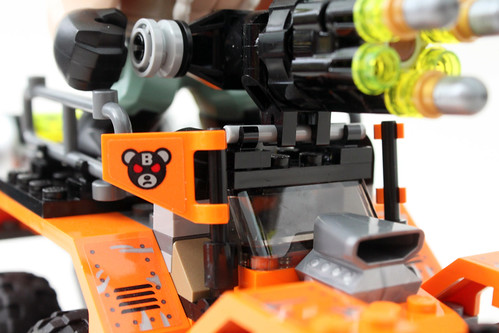 In the driver’s area, Bane is obviously too big to fit in a regular vehicle so he has to stand behind the steering wheel, similar to what Killer Croc does in his Tail-Gator (70907).

Above the windshield is a mounted six-stud shooter with a printed magnifying glass used as a targeting sight. The ammunition used are some larger rounds as well as the standard studs. There are plenty of spares includes as well. 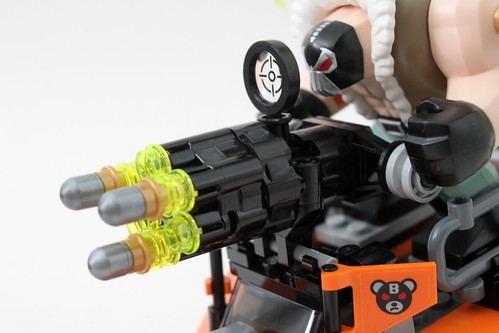 Towards to back of the truck is a large toxic tank that can be removed from the Technic pins. I do like the look of it with the handles on either end and the trans-green in the middle. 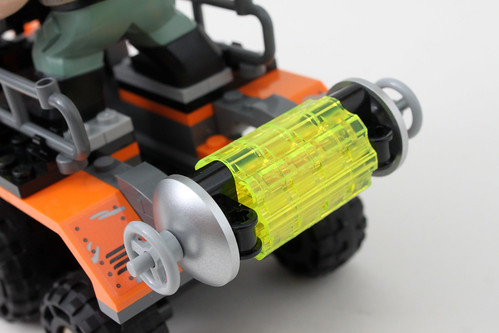 The LEGO Batman Movie Bane Toxic Truck Attack (70914) is a fairly decent set with the main draw being Bane and Mutant Leader.

The truck itself does have some decent play features but seems a bit small. I would’ve preferred that more parts when to that instead of some of the other builds. Speaking of the other builds, they are nice additions. The Whirly-Bat is a nice little nod to the comics. The toxic waste tank also has a play feature with the exploding function and it does go nice next to Bane’s truck. 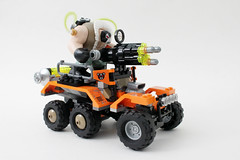 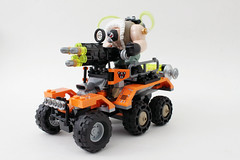 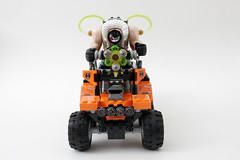 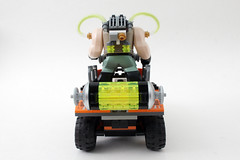 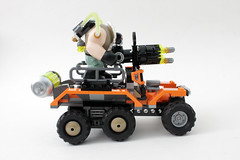 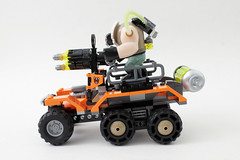 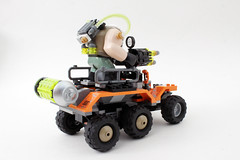 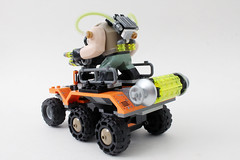 One main deterrent is the price point of $49.99 for only 366 pieces. The main things that go to get cost most likely the Bane bigfig and some of the more larger parts. If you are thinking of picking up this set, I would recommend getting it when it is on sale. 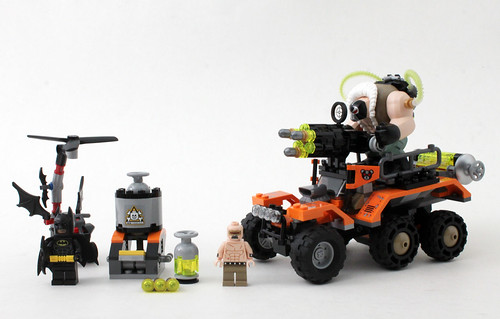